The Fringe Festival has officially begun again for another season of fun, frivolity and, quite frankly, fabulous entertainment all round. Featuring world class music acts, you can dance the night away at the Royal Croquet Club or be lured by the twinkly lights of the Garden of Unearthly Delights. With venues clustered together, you can easily find your way into the city via public transport without having to stress over where to park the car. Starting early and finishing late, there is an abundance of entertainment to soak in, along with incredible food and beverages.

I’m a huge fan of the Fringe and look forward to getting out and about with friends to enjoy the good times but let’s face it, it’s all fun and games until someone ends up on a drip!

With our changeable Adelaide weather this summer, the temperature can be mild one minute and then skyrocket back up to 35 degrees the next, so it’s pretty important to be mindful of the heat. When you’re out and about having fun, espresso martini in hand, it’s easy for your body to become dehydrated pretty quickly. Spending a night at the Royal Adelaide instead of the Royal Croquet Club doesn’t really have the same ring to it – so stay hydrated folks! On the subject of heat, if you’re heading into the city for a day out in the sunshine, don’t forget to pack the suncream.

With so many late nights jam-packed full of entertainment, our sleep quota can get a bit of a bashing. Not enough sleep leads to poor decision making and feeling generally unwell so it’s best to plan your nights out around having the luxury of a sleep in the next day.

To get the most out of this year’s Fringe and to make sure that you stay safe, the best advice I can give you is to plan ahead. Grab your program or log into the app and get busy! Pack yourself a survival bag to keep you powering on and enjoy the 2017 Fringe Festival. 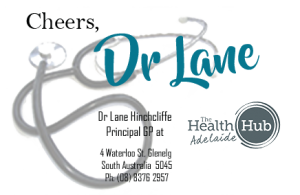 All of our practitioners are registered with the Australian Health Practitioner Register (AHPRA) and are qualified to provide the services listed.

**Eligible concession card refers to a Centrelink pension card, health care card or Commonwealth Seniors Card. Card holders must present their card on the day of consultation to receive a discount. Discounts apply Monday to Friday 8am – 5:30pm.

Please use our online booking service for all vaccinations. Choose the appropriate  appointment type. New Patents with a Medicare card are welcome.

PLEASE NOTE: If you do not have a Medicare card you must book an appointment at one of  the SA Health vaccination clinics.